I really wish that they could simplify technology for the older folks out there. The remote control is way too advanced for them. 79 different buttons for them to try and read and then they call you multiple times while you're at work trying to figure out how to "turn the damn tv on."

So I pitched an Idea to a cable company on how they should simplify the guide for our older generation so they could no longer be weary and have some type of independence when it was time for them to find "Family Feud."


Whenever my mother learns technology, she gets super excited. My dad used to be the same way. Once you taught them something over a hundred times, they would finally remember how to do it. And as long as you wrote it down, highlighted it and circled it six times they could never really forget how to do the steps on their own. Then you would save it in your notes, where you put that notebook because they would lose it once a week and the whole cycle would reset itself. Or better yet, after the hundredth time of a repeated sequence, you typed the notes and would have 50 copies laid out in your printer, to continuously replace the text they would magically lose, which you know they lost when they called you and asked you once again, how to find their tv show.

I like Xfinity because they introduced the voice control option on their remotes. So all you have to do is say what you want, and the show comes on. Simple right?


So last night, I kissed my mother goodnight as I usually do. She was already asleep, but as I was pulling her glasses off of her face, she started to wake up. I told her to give me the gum she had in her mouth because she was notorious for getting it in her hair or on the bed sheets. She spat it out into my hand and reclosed her eyes as I told her to go back to sleep. "Ok sugar" she replied. I looked back at her and thought to myself how cute she was when she was asleep. As soon as I stepped around the corner, I heard. "Married At First Sight." So I peeked in her room and saw her speaking into the tv remote trying to get it to turn to her latest favorite show. I sighed and walked back to my room. So much for tucking her in. As soon as I laid down, I received an email from Xfinity on Demand, thanking me for my recent purchase of " Married/Second Chances 112 Hd movie for $2.99".

Apparently, my mother made a purchase accidentally, while trying to find her tv show. Bless her heart, I thought to myself. I couldn't be upset. The day before, she was so excited to finally have  “figured” out the tv.

So I decided to burst her bubble like she just burst my wallet. I'm a businesswoman, small orders of $2.99 could really add up after awhile. I heard her telling the tv multiple times to find her show. I could only imagine 100 other charges of this. I went into her room and let her know what she had done and enabled parental controls to prevent her from making accidental purchases again.

"Parental Controls" needs to be changed to "Control Parent." 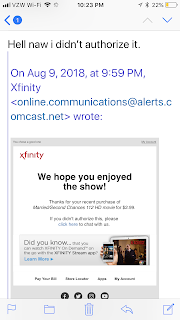 Popular posts from this blog

August 17, 2018
Cycling is a great way to get into shape. Whether it is indoor or outdoor, it is a fantastic way to know right off the bat, that your fat ass shouldn't have had Olive Garden's unlimited Pasta bowl the day before. A friend of mine suggested that we cycle together a few days out of the week. I was all for it because I needed a gym partner that could hold me accountable and make sure I was showing up to the classes. I was super excited and decided to go to Dicks Sporting Goods to shop around and get some of the clothing I would need for the class. They recommend moisture-wicking clothing or cycling clothes. I made my way to the cycling section and noticed that they had cycling shoes for sale along with their bike shorts. I quickly found my size, and something told me to just go ahead and try them on before I made that purchase. Bike shorts are an excellent choice for cycling because they have a cushion in the crotch area made to sit on top of the bike. Unfortunately, when I pu
Post a Comment
Read more

September 14, 2018
One of the most beautiful things in life, in my personal opinion, is the art of cooking. I love to Cook. During the Hurricane Harvey aftermath, I was staying in Manvel with my brother and my sister in law. On occasion, I would have to drive through Alvin, and I realized I needed to stop by HEB. I wanted to make spaghetti, something quick and easy since I was at work for nine hours and had a two-hour commute to and from work, due to the relocation. I had never shopped at the Heb in Alvin before, and I could see why. It was very dimly lit, and it looked sketchy from the outside. The inside was even worse because they didn't have all of the ingredients that I needed to make spaghetti. SPAGHETTI, one of the least complicated meals almost anyone could make. They didn't have any meat such as ground meat, Italian sausage or meatballs. They didn't have the packets of seasoning mix to put in spaghetti or garlic bread. I was so pissed, like what the hell did HEB stand for? Here E
Post a Comment
Read more

August 06, 2018
The 7 Reasons Why Black People Always Die First In Scary Movies I believe that we have all watched our fair share of scary movies. We’ve all seen the opening of a movie, with a woman in the shower. She hears a noise and says, “hello?” And the audience sighs because she gave her location away to the killer. Now imagine a black woman in the shower. She will have her shower cap on and will hear ALL. If she understands anything, it won’t be a hello. It’ll be a goodbye, she will either fight or flight. Imagine your top ten picks and then try to recall the black character in each those films. Did they die off first? Were they killed towards the beginning or middle of the movie? Yeah, let me clue you in as to why. We do not play by any of the rules:  You know those typical ghost stories? Where there is running water, or the doors are slammed or closed behind you while you're brushing your teeth? Yeah, WE don't play that. We would confront it. "Look here g
3 comments
Read more

If everyone likes you, You’re doing something wrong.